Happy Friday to all!! It’s been a great week around the Crazy House, The boyz are still happy to be at school, ( No homework…. yet, may be the reason). So that’s a plus. Da Baby starts pre-school on Tues and had a meet and greet with his Teacher this morning! It went better than I expected in some ways and worse in others…. But his Teacher, Mrs. C has a fantastic background in Special Ed and Early Learning, so I have high hopes for all involved!

So all in all it’s been a great week….

Woo Hooo…. it’s the first day to school, and I am doing my happy dance!! No more… Mom, he hit me… or Mom, he’s looking at me! 😉 back to our regular schedule,  I couldn’t be happier. Da Baby (who’s really not a baby..but) starts next week, so for now we get to spend our days together!! SO the boys got off without a hitch, I’m sure that’ll last the rest of the week. Then it’ll be… aww do I gotta get up?! But I’m a perverse Mom and enjoy that part too, as long as they get up. (within a reasonable time) Plus school doesn’t even start till 9am! How cool is that??

I hope y’all have as good a day as I’m planing on!!
Happy Back to School Day!

It’s Friday once again…. Monday starts school!! So for me at least it’s the last weekend of summer, and how you may ask are we going to spend it?? Why at a big Back To School bash thrown by friends across town! I can’t wait… food, drink and a bouncy house, what more could one ask for? So today I’ll spend in the kitchen making a couple of desserts, on the list to create, some kind of light trifle and Midnight Torte Chocolate Chip Cookie Dough Devil’s Food Cake Cheesecake.
But for now…. coffee and the High 5 for Friday.

1. Easy E crashed his scooter…. After “doing like 50 down the road…. but I tucked and rolled!”

2. The bridge over the Chesapeake Bay, it’s so pretty and huge!
3. A face only a mother could love!
4. The start of the new bath mat… in all the right colors for the Little Boyz bathroom
5. The blue Moon….. I didn’t notice any blue…. but here it is!

Linking up with Lauren Elizabeth

I spent most of Friday trying to mow our back yard… put gas in the mower, (the push mower), check the oil…. pull to start and take off…. now mind you I haven’t mowed in a couple of weeks… it’s either been raining or the boys have had something going on, or I just didn’t! But after two weeks the grass is pretty tall and kind of wet due to all the rain… so mow a few feet… kill the lawn mower… pull to start… pull to start…. pull to start…. you get the idea… mow a few more feet. Then I notice the lawn mower is kind of wet, well, so the grass…. mow a bit more, then I notice not only is the lawn mower wet but it’s turning black, hummm, run through my list, gas, oil, forget to screw the oil cap on tight, oil all over the lawn mower…. awww, what a mess!!  Clean up said mower, put more oil in….. and ta da!! Pretty yard! 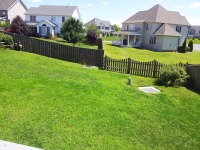 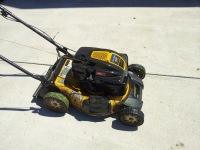 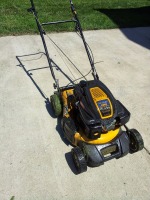 And as a reward for getting the grass mowed…. a trip to the beach!! Which was enjoyed by all, the boyz had tons of fun playing in the waves and being rolled. The Mr and I had more fun watching them, I thought it was freezing but boys will be boys! 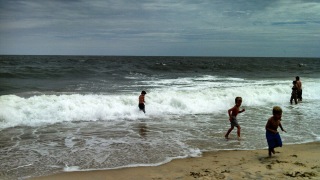 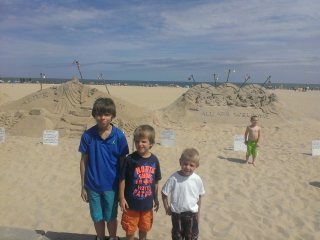 All I can say is TGIF….. the Mr. is taking the weekend off, (so he says….) so this weekend will be at the Beach!! WooHoo, hopeful it warms up!! It can’t be fall already it’s only August, school hasn’t even started yet!! But 60’s or 80’s this woman is going to the beach, (everybody else is just along for the ride!)

Here we go along to the High 5…. (been more like a fair to middling 5) but enough with that!! on to the showww

1.-2.  So we managed to get Eazy E’s room mostly done!! I need the rest of the street signs,( who knew the the sign shop could make road signs…. duh!) And few pieces of regular sheet metal. But he’s happy… I’m happy… it’s all good!!

Then you shouldn’t say any anything at all…. cuz in my world that happens allllll the time! Ok, so I’ve been a bit cranky, ok….ok a lot cranky and out of sorts and I haven’t been able to find a way out of this funk I’ve been in. So I’ve decided inaction is feeding the funk…. so today I will be in a better mood…. I will get the laundry done…. I will get Eazy E’s bedspread done…. I will not let myself drag me down… Besides it’s a beautiful day in the neighborhood… and we are all upright and mobile, what more could I ask for?

It’s a gloomy Friday this week… and I haven’t really taken to many pictures this week. Been doing a fair amount of reading, instead of…. anything else. It’s hard to get motivated in the gloom. I did manage to get Eazy E’s curtains done (Now I’m waiting on the Mr.) and I got the top part of his bedspread done!! Woot… Woot (why do I make complicated designs?) Next on the list is ….. haha Tin Snips.

1.Laying out Easy E’s bedspread, this is the final version, the one we both liked.

2. Drop cloth Curtains, love the texture they’ll bring and E loves the racing stripe.
3. Ice Coffee, by Starbucks!! On sale on less
4. Power Spikes are on the decline… thanks to these little pills!!
5. Ducks in the yard… way better than snakes in the garage….
Linking up with Lauren Elizabeth..

and The Good Life

Oops, OK, so I missed Wednesday… I have no idea where it went I know it was here.. because it’s now Thursday. I guess I was caught up in little boy randomness (no line so I guess it’s already a word) Now for the catch up…

I’ll add my polk-a-dot chucks for MMA class tonight, but other than that…. Tada…. Craft room approved attire, where I’ll be working on Eazy E’s room stuff!! I can’t wait to start putting it all together.

What a way to Link up…. but whatever works today!!  Smile, It’s makes ’em wonder what you’re up to!

So it’s the first Monday in August… Does anybody else feel like this summer has just flown by? I’m starting to consider school starting, my first day of the first day back to school in quite a while, and my first “real” fall in awhile, think the deep south (where we have spent the last few years). but here’s a quick look back at July and the dog days of summer

So as you can see this summer has been fun of fun and crafts, new states. Now I think I’m ready to settle into a nice calm, (Yep, right) school routine…. along with crisp fall days, the leaves changing colors and homework. I think the boys are ready too. But until then I’ll enjoy the last days of summer along with mah boyz!

Ya know that’s quite possibly the hardest part of Blogging… sometimes a title jumps at me and most times I stretch for one, so for today, it is what it is… Friday!! And time for H5FF, one of my favs to do , but also sometimes the hardest…

So it was my B-Day this last week! Dinner out (not on Friday!)

1.& 2. Flowers from the kids
3 & 4 The new much smaller Messenger Bag! I love this shape and the fact that I can carry a small child , uh, everything I think I need plus what everybody else thinks they need. Made outta the Mr’s old jeans, the Biddy girls pockets… a painters tarp and other random scraps. What’s not to love?
5. A new cookie recipe, (that I already modified) double chocolate chip and English toffee chocolate chip. yumm…
Have a great Friday and a fantastic weekend!!